SOPA Black Out and a positive Supreme Court Ruling 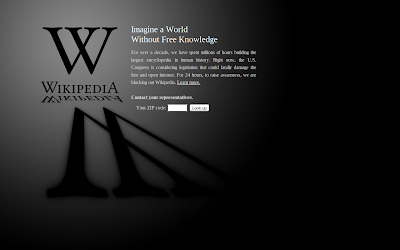 I don't know how anyone could not know this, but Wikipedia is doing a "black-out" today in order to raise awareness over the SOPA (Stop Online Piracy Act) issue.  Here is what they say on their black-out page:

Imagine a World
Without Free Knowledge
For over a decade, we have spent millions of hours building the largest encyclopedia in human history. Right now, the U.S. Congress is considering legislation that could fatally damage the free and open Internet. For 24 hours, to raise awareness, we are blacking out Wikipedia. Learn more.

I would link to an article about the SOPA, but I can't get to Wikipedia!  Basically, the act is aimed at stopping the piracy of things like unreleased movies and such.  I guess the big companies are worried that this would give the government too much power.  With that, I agree. The government already has too much power.

Google is doing something similar.  They have blacked-out their Google Logo on their main search page.  Here is a picture of that as well: 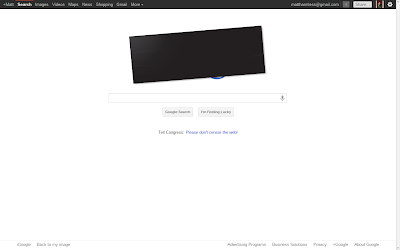 On a positive note, the Supreme court ruled in favor of churches that they have the right to fire people based on the Church's beliefs.  Here is how the Huffington Post starts their article on the topic:


Employees of religious organizations whose job duties reflect "a role in conveying the Church's message and carrying out its mission" are barred by the First Amendment from suing over employment discrimination, said the Supreme Court in a unanimous opinion handed down Wednesday morning.