Proclamation by the President

My sister just sent this to me. I thought it was great, so I wanted to pass it along.

Contract for a Curve

I don't know about other teachers, but I don't like to curve my test grades.
I especially don't like to curve the grades when there are still a handful of students who did well. Even more so I don't like to curve test grades when every question on the test came from the homework... and I told them that they were coming from the homework!
If I just automatically curve a set of poor test grades, that is teaching them that you can't really ever fail, and if you do, it won't be that bad. I know that we live in an age of bailouts and other economic assistance when you fail, but that still doesn't mean that it will always happen.
And even if it does... Is that really what you want? Do you want to be bailed out when the reason for your failure is you?
I know that the answer to that question is, more and more, becoming a resounding, "yes!" Our classrooms are filled with people who would genuinely take a passing grade even though they know they don't deserve it. Even though the standard to pass has been lowered to a 60%! That's right, you only need to demonstrate a knowledge of 60% of what you have learned to pass.
Well, I could rant on this for a while, but school is getting ready to start so I must end this post. I did want to show you the Contract for a Curve that I made up last night. I just figured, if they want me to curve their grade, then they are going to need to do something for it.
Here it is: Contract for a Curve
at November 25, 2009 2 comments:
Email ThisBlogThis!Share to TwitterShare to FacebookShare to Pinterest
Labels: education, school, teaching 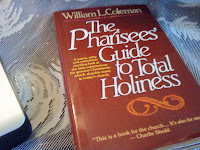 by William L. Coleman.  I found the book on a book shelf in the closet at church.  I was clearing the shelf off to take into my office for all of my books.  This is one book that came with me into the office.

I have never heard of this author, so I hesitate recommending this book, but so far it has been pretty good.  I just finished chapter 5 and I am plowing ahead into chapter 6.

It is keeping my attention (which means something for a guy with such extreme ADD).  It isn't a perfect book: there have been a couple of things that I don't quite agree with how they were phrased, but overall I think this guy is onto something.  It might be a tad bit outdated, but it really does offer a good synopsis of who these Pharisees were and what they were all about.
at November 21, 2009 1 comment:
Email ThisBlogThis!Share to TwitterShare to FacebookShare to Pinterest
Labels: book review, book thoughts, reading, spiritual

I have been preaching through the Sermon on the Mount at church.  It has been a great experience so far, and I have learned bucket loads of great gospel truth.  The big blaring truth is that God is infinite in His wisdom.

I just watched a short video that really falls in line with that I have been seeing as I study.  It is worth a watch:

By the way, I haven't read Crazy Love yet, but it is on my list. If you've read it, let me know what you think.
at November 21, 2009 No comments:
Email ThisBlogThis!Share to TwitterShare to FacebookShare to Pinterest
Labels: gospel, preaching, spiritual, video

I would describe this, but I think this video does a much better job of that... And if I tried to describe it, I would most likely be quoting bits of the video, and then my message would feel very disjointed because I wasn't quoting the whole video, and then you might be confused and not want to watch the video.  In fact, if I type any more than what I have already typed, you won't even bother to watch the video, because most of you (and me) don't read blogs that are more that 140 characters, thanks to Twitter.

Anyway, here is a video.

My youngest is having SURGERY... TOMORROW!
Ok.  I'm calm.
BUT HE'S HAVING SURGERY!
No really.  I am calm, but I am realizing that this is going to be an agonizing event.  It is a relatively simple surgery.  He has a gastric hernia... a small place where the muscles along his stomach wall never joined.  This is something that he was born with, and we thought he was going to grow out of it.  He didn't, and this last year it started to increase in size.  A doctor and a second opinion later and now he is having surgery.
I am always seeking to place my sons in God's hands: Relinquishing my rights over them and their futures and entrusting them to God.  I know that God always has control, but in the spirit of Hannah (Samuel's Mother) I want to give them to God's service as Has entrusted them with me.  These children are His.
As much as I know that... It doesn't always feel that way.
Right now he feels like mine and I am not looking forward to handing him over to these doctors and nurses tomorrow.  Even though I know he is really in God's hands.

If you are of the praying sort... He is having this surgery tomorrow afternoon.  We would appreciate your prayers.
at November 17, 2009 No comments:
Email ThisBlogThis!Share to TwitterShare to FacebookShare to Pinterest
Labels: personal

Over at Challies.com, you can always find Free Stuff Fridays... At least you can on Fridays...

A couple of weeks ago I decided to start dropping my name in the hat to see if I could win something.  This last time I won a year's subscription of Table Talk.


Tabletalk is a tool that helps you grow in your knowledge of God and in your love for His Son and His people. Each month is packed with more than 60 pages of focused, practical Bible study and insightful commentary by today’s top Christian thinkers. Over the years, Tabletalk has been recognized for its excellence through several awards. Today, people all over the world read Tabletalk on a daily basis. The magazine is regularly found in seminary libraries and churches throughout the country. Many credit Tabletalk with helping them maintain a solid life of study and prayer.


Here is a sample issue.

I used the Church's address when I filled out the form, so our church is now getting a year's subscription.

Just thought I would let you know.

I won.
at November 16, 2009 No comments:
Email ThisBlogThis!Share to TwitterShare to FacebookShare to Pinterest
Labels: blogging, random 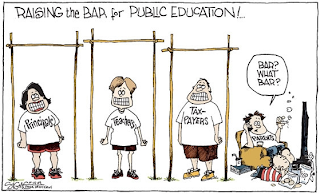 I saw this comic in the teacher's lounge.

Even though I don't think that this at all represents all parents... I do believe that this accurately depicts the situation.

I would write more about this, but I have to start preparing for my day!
at November 09, 2009 No comments:
Email ThisBlogThis!Share to TwitterShare to FacebookShare to Pinterest
Labels: comics, education, funny, pictures, teaching
Newer Posts Older Posts Home
Subscribe to: Posts (Atom)