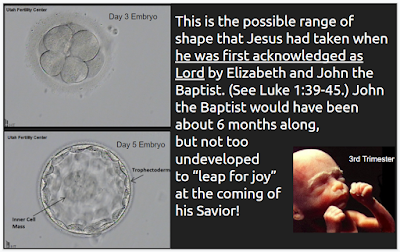 [39] In those days Mary arose and went with haste into the hill country, to a town in Judah, [40] and she entered the house of Zechariah and greeted Elizabeth. [41] And when Elizabeth heard the greeting of Mary, the baby leaped in her womb. And Elizabeth was filled with the Holy Spirit, [42] and she exclaimed with a loud cry, “Blessed are you among women, and blessed is the fruit of your womb! [43] And why is this granted to me that the mother of my Lord should come to me? [44] For behold, when the sound of your greeting came to my ears, the baby in my womb leaped for joy. [45] And blessed is she who believed that there would be a fulfillment of what was spoken to her from the Lord.” (ESV)

at November 14, 2020 No comments:
Email ThisBlogThis!Share to TwitterShare to FacebookShare to Pinterest
Labels: abortion, life, Luke

The Paradox of Blessedness 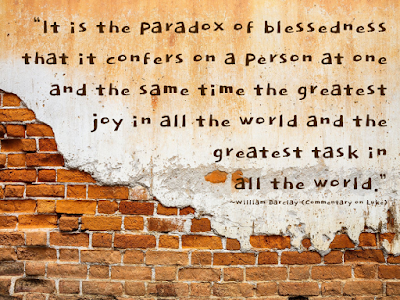 at November 09, 2020 No comments:
Email ThisBlogThis!Share to TwitterShare to FacebookShare to Pinterest

If you want to spark a debate on Facebook, just mention Calvinism.

(At least in the circles that I operate in.)

Actually, you don't even have to mention that word, just quote a passage of scripture that emphasizes God's sovereignty, or share a Pastor's quote that is emphasizing the doctrines of Grace... and soon to follow, the free-will police will arrive to point out all of the "whosoever's" in the Bible.

I get it. A God that is absolutely sovereign over the entire universe can be alarming to our American sensibilities. It is disconcerting for many, the first times they encounter these passages and contemplate, not their implications, but simply what the texts are actually saying. Of course, as I have embraced these passages, they have led me to some of the most humbling and deeply satisfying and peace saturating realizations in my life. But it isn't that way to everyone.

In this blog post, I would like to share with you two of the biggest misconceptions about Pauline Theology (a.k.a. Calvinism, a.k.a. The Doctrines of Grace) that I have encountered. I want to share these misconceptions, not because I want to belittle anyone and I definitely don't want to give off an air of intellectual superiority. It is just that 99% of the debating that I have encountered when dealing with this topic, are wayward conversations that fail to tackle any of the actual issues. (In other words, most that attempt to debunk will use passages and phrases that don't debunk anything and are, quite frankly, points that I am in total agreement with, but I can tell that my debating "opponent" believes they have delivered a fatal blow in one fell swoop to my stance.)

The first misconception might be apparent in the previous paragraphs. Here it is: many assume that any teaching on the Sovereignty of God goes against man's responsibility. Sure, there are those that might teach that (a.k.a. hyper-Calvinism), but that is not the teaching that carries the nickname of Calvinism. I am personally drawn to "The Doctrines of Grace" because it is the only systematic way of tackling scripture that is genuinely humble in its approach. Calvinism (for lack of a better word) says that God is Sovereign and Man is Responsible - both are true. There is no attempt to reconcile these two realities in any way that will diminish the truth of the other one.

I consider this one of the biggest misconceptions concerning this particular belief system because those that are confused will tend to throw scriptures about man's responsibility and the free offer of salvation to all... as if they denounce the passages that literally state God's choice and His Election. Calvinism is the only system of belief that I have encountered that simply embraces both without attempting to explain how these truths tie together in eternity. Every other system (on either side) tends to go at least one step beyond what the scriptures say and will delve into some version of implication on those verses, and they will let one passage supersede another instead of letting them complement each other.

(If you need examples of this, I would be happy to give some in the comments section of this post.)

If you want to unseat the concept of election, in a conversation with me, then you will not be able to do that by telling me that Christ came to save all or that Christ came for the world. I won't disagree with you. All of your mic-drops when you speak about the necessity of faith will land on a pillow of my agreement: Faith is necessary - People must believe to be saved - and anyone can do this! I can say that and also say that God chose us in him before the foundation of the world, that we should be holy and blameless before Him, and that He predestined us for adoption to himself as sons through Jesus Christ, according to the purpose of his will (See Ephesians 1:4-5) without batting an eye. They are both true because that is what the scripture says.

It is confusing for many, sort of like trying to explain what light is. Physicists will tell you that there are aspects of light where it must be treated as a wave. There are also aspects of light that demand it be treated as a particle. Particles can't be waves and waves can't be particles. The physicist will tell you that there is an explanation that ties these both together, but that has eluded them, for now. In the meantime, they must simply accept the realities as they are revealed.

On the tails of this first misconception comes the second one: the second misconception finds it's roots in temporal snobbery. (Temporal snobbery is what one might call the stance, intentional or not, that the thoughts and beliefs and teachings that are happening today have more weight in your mind than the 2,000 years of Christian thought that preceded us on the historical stage of the Church.)

Calvinism is simply a nickname for Pauline Theology... as I have alluded to previously in this post. It could also be called Augustinian Theology, but my favorite name for it is "The Doctrines of Grace." I mention this because the debates that occur over these things were previously heard and have been recounted for our edification.

Many, many years before Calvin, this same debate came up between Pelagius and Augustine.  Pelagianism was deemed a heresy by that generation. Calvin's teachings are simply a rehashing of Augustine, and the Doctrines of Grace are only one part of that. I mention this because many will throw out there that Calvinism is heresy, but historically speaking, well... it isn't.

There are deep veins of generations of truth. Hours, years, and whole lifetimes have been spent studying scripture, and to ignore the weight of previous generations of the Church (the body of our Lord and Saviour, Jesus Christ) seems, well, petty.

To announce something as heresy, apart from a Biblically guided church council is ridiculous. The "rugged individualism" that our American Nation has fostered has left us crippled when it comes to the glorious unity of the Body of Christ, not only in this generation but in all previous generations.

(For my thoughts on creeds, statements of faith, and the Christian heritage of the Church, see this page on my church's website.)

These are the two biggest challenges that I have encountered during any conversation on this topic or any of its branches. I share this here to attempt to be helpful, not in persuading anyone to adjust their systematic theology, but to foster a better conversation when addressing these talking points.

at November 06, 2020 No comments:
Email ThisBlogThis!Share to TwitterShare to FacebookShare to Pinterest
Labels: calvinism, conversation, debate