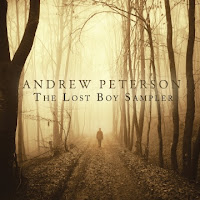 If you have never been to NoiseTrade.com, now would be a good time to visit them.

Yeah sure, there is the option of leaving the artist a tip, but sometimes I don't really know the artist that well.  There have been a couple of times that I have left a tip for an artist that I knew and I believed in supporting their work (or ministry in some cases).  But sometimes I just download something that sounds interesting, but I have never heard of it before.

I also downloaded two albums from The Vespers.  I have never heard of this group, but so far I have really enjoyed what I've heard so far.  In fact, I am listening to them right now. Here is a video of them live in New York.

at April 26, 2013 No comments:
Email ThisBlogThis!Share to TwitterShare to FacebookShare to Pinterest
Labels: Andrew Peterson, free, music, noisetrade, The Vespers

Taking God Seriously by J. I. Packer was not at all what I expected it to be.

I have read a couple of other Packer books.  I have thoroughly enjoyed everything that I have read from him in the past, so when this new book became available through Christian Audio, I was happy to listen to it in order to write a review.

Having read these other books by Packer, I was expecting this book to deal with big thoughts of how we need to take God seriously.  I was ready to soak in some over-arching themes on the importance of really listening to God and doing what He says.

My first surprise came when he started talking extensively about issues in the Anglican church.  Not only did I not know that Packer was Anglican, I had also never seen him refer to any current denominational issues.  This book contains numerous references to current issues that are plaguing the Anglican church and many other churches in the world today.  Much of this book felt like an address to others in the Anglican church to ... well ... take God seriously.

The next surprise that this book delivered was related to the content.  Sure, he addressed some issues that I expected, like repentance, but he also addressed some issues that I didn't expect, like church, baptism and communion.  Even though I didn't necessarily agree with everything he said, I also didn't find myself disagreeing with anything he said either. I found the information landing on very common ground and very Biblical, at the same time. But what made this surprise content really enlightening was that while I was listening to it, I found myself realizing that I hadn't been taking Baptism or Communion as seriously as I should, and that the question of taking God seriously couldn't really be dealt with until these issues were addressed.

If you've never encountered a book by J.I. Packer, this is a great place to start. He has a straight-forward, no-nonsense style of writing that I find refreshing.  He doesn't beat around the bush, he goes straight to the point, and he brought this direct style of writing, which I've normally encountered in his theological works, into this current, culturally relevant book.

Blessed by not being Blessed

The church where I am the pastor has seen some growth lately.  On Easter Sunday we had 4 baptisms, there have been others wanting to join the church, and several others who have been attending on a regular basis for a couple of months now.

I am struggling for the words to try to explain how exciting this has been for us.  You need to understand that we were averaging about 25 people, 3 months ago.  Lately it has been closer to 50 on several Sundays.  Then, this Easter we had 75 people in our building, when the previous Easter we had 15.  On a personal note, before the four baptisms that I performed on Easter Sunday, I had only performed three other baptisms total... in my whole life!  It has been very exciting.

To top everything else off, the people that are coming are the exact sort of people that I had been hoping for.  Nearly everyone that is new is someone who has either never been to church, or has not been to church in countless years.  There are even several who attended Edgewood when I was a child, who have come back now.  More than one person was convinced that the walls would come crashing down if they ever set foot in a church, and yet, here they are.

When I first came to Edgewood to be the Pastor, I had hopes of a revived church.  I prayed for it, I longed for it, and I diligently sought God for it. But instead of growing, we actually got a little smaller.  There were some families that just stopped coming.  Then there were some regulars who weren't as regular.  Things were getting quite slim, and there were several Sundays that the crickets were chirping and the tumbleweeds were blowing through.  We were hoping and praying for God to bring the unchurched through our doors, we were inviting people left and right, and our desire was simply in the Gospel of Jesus Christ being spread in our town.

To be totally honest, my confidence plummeted.  I started thinking that all of my sermons were horribly presented.  I started questioning my interactions with other people... was I nice enough?  ...did I say enough?  Everyone that left, I took it personally.  Every criticism was really a criticism of me.

But then something really neat and totally unexpected happened.  I became nothing.

It happened when one particular couple left the church. I couldn't believe it. I had tried everything I knew.  And with these people, I had really attempted to reach out to them and encourage them in any way that I could.  All of the stops had been pulled out and I still came up lacking.  I was really nothing in the process, but that is a good thing.

I mean, isn't this Christ's church anyway.  Isn't He the one who builds it?  Isn't it the Spirit who empowers it? I wasn't attempting to find my "nothingness" in the church, it just happened.  Then the more "nothing" I became, and the more okay I was with being nothing, the more the gospel started to seep into my life, becoming a part of my very psyche.

I really started to believe that it was all of grace.  It was all about what Jesus does and not about what I can do.  Consider how the gospel can play into our service:

What a blessing it has been in God's timing.  I know for a fact, that if God would have brought people to our church when I first came here, I would have been tempted to glory in myself instead of in Him.  God has blessed me, by not blessing me, when I thought He should.
at April 17, 2013 1 comment:
Email ThisBlogThis!Share to TwitterShare to FacebookShare to Pinterest
Labels: church, Edgewood, personal
Location: 236 Poland Road, Danville, IL 61832, USA
Newer Posts Older Posts Home
Subscribe to: Posts (Atom)