The article is called Fake Love, Fake War.  It is written by Russel Moore and you can find it on the Desiring God blog.  Allow me to quote a couple of paragraphs that really grabbed my attention.

Near the beginning of the article, Moore makes this valid point:

Pornography promises orgasm without intimacy. Video warfare promises adrenaline without danger. The arousal that makes these so attractive is ultimately spiritual to the core.

Satan isn't a creator but a plagiarist. His power is parasitic, latching on to good impulses and directing them toward his own purpose. God intends a man to feel the wildness of sexuality in the self-giving union with his wife. And a man is meant to, when necessary, fight for his family, his people, for the weak and vulnerable who are being oppressed.

It is so valid and so important to understand that what we wrestle with is not flesh and blood, but principalities and power... We are in a spiritual warfare.  If we don't recognize this, we become vulnerable to attack because of our naivety.

Near the end of the article he makes this statement... Which, when I read it, I may have given a quite verbal and vocal "amen!" or at least a "wow!"

Besides the importance of these words, especially as I attempt to raise my own boys into men, I absolutley admire Moore's ability to put to words things that I've thought in ways that make more sense than how I've thought them.

Read the entire article... It's worth it.  Click here.

at May 26, 2012 No comments:
Email ThisBlogThis!Share to TwitterShare to FacebookShare to Pinterest
Labels: desiring God, quotes, Russel Moore

The Man Who Was Thursday by G. K. Chesterton - Book Review

Until a few months ago, I did not realize that G. K. Chesterton was a writer of fiction.  I knew of his books on such topics as orthodoxy and heresy, but was unacquainted with the fictional works that had an impact on such authors as C. S. Lewis and J. R. R. Tolkien.  The first book I read was Manalive.  I wrote a review of that book not too long ago.

The Man Who Was Thursday was described by C. S. Lewis as, "A powerful picture of the loneliness and bewilderment which each of us encounters in his single-handed struggle with the universe."  It is about a man named Syme, who is employed in the service of the British Police, in a special department, by a special man, to fight against the anarchists of the world.  As he infiltrates the inner circle of anarchy, taking the name of Thursday, as each member of the inner ring has a name of a day of the week, he is left wondering, and fighting to determine, who is this man named Sunday?

I've really enjoyed reading Chesterton's stories.  There is a certain whimsicalness to his writing as he attempts to discuss serious topics through the use of story, but he does it in a way that the belief system that he is discussing plays a part in the story the way a tent plays a role in the circus.

If you haven't read any Chesterton, this one would be a good place to start.  A mix of sci-fi, fantasy, and socio-political drama-comedy!
at May 17, 2012 No comments:
Email ThisBlogThis!Share to TwitterShare to FacebookShare to Pinterest
Labels: book review, books, books 2012, GK Chesterton

"Is not this then the very time when the door is wide open for the preaching of the Gospel?

The age in which we are living is so similar to the first century in many respects.  The old world was exhausted then.  The flowering period of Greek philosophy had come and had gone, Rome in a sense had passed her zenith, and there was the same kind of tiredness and weariness, with consequent turning to pleasure and amusement.

The same is so true today; and so far from saying that we must have less preaching and turn more and more to other devices and expedients, I say that we have a heaven-sent opportunity for preaching."

From Preaching and Preachers

by Matt Chandler with Jared Wilson.

I especially appreciated his personal approach, sharing stories and experiences that illustrated different aspects of the Gospel.  In many of his stories he was willing to share how he had struggled or gotten it wrong in the past; times where he had shared the gospel in not-so-perfect ways, but God's grace was even in those events of his life, as he so adequately shares.  One story he titled, "The Dirty Rose" was especially touching.

If you have questions about the Gospel or you are simply desiring a deeper understanding of the Gospel, then this is a good book for you.

Final Ephesians message from Chapter 3 with illustrations from my son.


at May 10, 2012 No comments:
Email ThisBlogThis!Share to TwitterShare to FacebookShare to Pinterest

A People, Not a Place

I'm reading through Mark Dever's What Is a Healthy Church?

for assistance with a Bible Study on Wednesday nights at Edgewood and I wanted to share a quote from chapter 2, dealing with the thought that the church is a people, not a place.

Remembering that the church is a people should help us recognize what's important and what's not important.  I know I need the help.

For example, I have a temptation to let something like the style of music dictate how I feel about a church.  After all, the style of music a church uses is one of the first things we will notice about any church, and we tend to respond to music at a very emotional level.  Music makes us feel a certain way.  Yet what does it say about my love for Christ and for Christ's people if I decide to leave a church because of its music?

Or if, when pastoring a church, I marginalize a majority of my congregation because I think the style of music needs to be updated?  At the very least, we could say that I've forgotten that the church, fundamentally, is a people and not a place.

I know that this could open up a slew of other thoughts, especially if you've left a church over music, on either end of the spectrum, but I fundamentally believe in what Dever is saying.  The church is a people, not a place.  There is too much leaving going on in our local churches over issues that shouldn't be leaving issues.  There is also not enough cooperation and fellowship between different local gatherings over issues that shouldn't be dividing issues.

Feel free to join us on Wednesday nights at Edgewood Baptist Church, as we ask the question, What is a Healthy Church?

This Homework Ninja was found on the back of a quiz I collected... 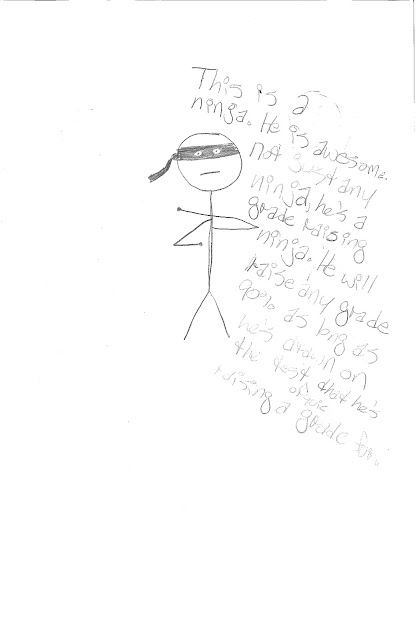 at May 07, 2012 No comments:
Email ThisBlogThis!Share to TwitterShare to FacebookShare to Pinterest
Newer Posts Older Posts Home
Subscribe to: Posts (Atom)