I enjoyed the movie Groundhog Day, but I don't think that I would necessarily want to live it...

at February 17, 2014 No comments:
Email ThisBlogThis!Share to TwitterShare to FacebookShare to Pinterest 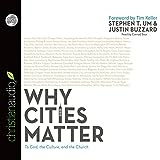 Why Cities Matter: To God, the Culture, and the Church

by Stephen T. Um and Justin Buzzard was an excellent book.

It challenged many of my preconceived notions concerning cities (specifically that cities are evil) with some very simple Biblical perspectives on cities... In other words, this book made me ask the simple questions, "How does God view cities?" and "How should I view cities?"

The authors started by doing some basic teaching on the direction that cities are taking and the roles they play in our modern world. My eyes were also opened as the authors began to discuss the future of cities, the statistics of the numbers of people who will be living in cities, and exploring the myriad of reasons why people move to cities. As the authors continued with the history of cities, including a Biblical history, I found that my heart began to long for the city that I live in.  I know that Danville is not a large city by any stretch of the definition, but it is the city that I reside in... It is the city that is home to people that I love... It is the city where people go to work and play everyday that have destinies and futures that are in jeopardy of God's imminent judgment... It is the city that I have been called to minister to.

Why do cities matter to God? At one point this book simply says, "... because people matter to God and there are people in the city."

I want to recommend this book to everyone that I know, especially to those in ministry in my city, because this book progresses toward teaching us how to know our city. Before I read (listened to) this book, I had never contemplated learning my city, and the impact that knowing the heart of my city might have on how I (or we) minister in our city.

This is a book that I am most definitely going to have to purchase a hard copy, or maybe several hard copies, for my church and for others in my community. We need to know our city, and this book is going to be a great tool in the toolbox.

Check it out now on Amazon.com

Today I am at DACC for the WYSE Academic Challenge. I don't normally get into these sort of events, but there was no one else to "coach" this group of kids, so I was the one selected. (Honestly, I don't mind. They are a great group of kids.)

I mention this only because when I arrived for the orientation and all of the schools were in the gymnasium, I overheard another teacher talking about the upcoming Bill Nye vs. Ken Ham debate that is going to be streaming live tonight. For some reason I assumed that this teacher was speaking on behalf of Ken Ham. I heard him saying something about looking forward to seeing the other guy get "trashed" in this debate.  As I approached and mentioned that I was going to watch the debate as well, I quickly realized that he wasn't on the Creation side of the debate, but instead, he was in support of Bill Nye, and was assuming that the other guy (Ken Ham) didn't have a chance.

Now, I would've challenged this fella, seeing that I was in support of Ken Ham, but also because even other evolutionists and atheists have distanced themselves from Bill Nye, not feeling that he is adequately prepared for this encounter. I would've challenged him, as I said, except he was a "I can't get a word in edgewise" sort of guy.  I finally smiled and nodded and strolled away. He may have still been talking when I got out of earshot, but I couldn't take much more of this guy's attitude that said, "Who would actually be in support of a Creationist?!?"

I find this attitude annoying. Especially when guys like Bill Nye the Science Guy makes statements like this,


"Many people have been critical of me for taking this debate because I'm not an expert on evolution," Nye said. "But this is not advanced evolutionary theory. This is not high-school science. It might be elementary-school science. That Mr. Ham and his followers don't embrace it is troubling." (full article here)

Many Creationists (and others who are latching onto Intelligent Design) are not idiots. We are not unintelligent, backwoods hillbillies. For the most part, we are people who are questioning the consensus. I haven't held onto creation science because of Scripture alone... I am too much of a mathematician to not ask questions... I have held onto creation because it makes sense scientifically as well. For me, Creationism is easily more believable than the established Darwinian Evolutionary Theory.

For the record, I am not afraid of exploring and considering both options, and even exposing my children to both options, I mean, I really want my boys to think... I am in agreement with Ken Ham's thoughts as he stated in a response video where he originally challenged Bill Nye to the debate,

Anyway, I could rant for awhile, so I will stop here. If you want to watch this live debate, here it is: (I know it will be playing in my home tonight.)

For more information about when this begins visit debatelive.org.