My very first car was a 1974 VW Beetle. I loved it. I can still remember the first time that I took it out on the road by myself. I became a permanent Bug fan.

Its color could only be described as fluorescent green. It nearly glowed at night, but it was very easy to spot in a full parking lot.

I have numerous stories that I could tell about that Bug. Stories to do with the softball-sized hole in the floor, the snow that would blow in through the vent, and the battery under the back seat that burned a hole in a friends shorts.

Once I tried to take it up to it's top speed. Believe it or not, I made it up to almost 100 mph. (Kids don't speed... it is very stupid and irresponsible.) But by the time I sold it, at the end of its life, it would barely go 25 mph.

Ever since I sold it, I have had the hope that I would one day be able to own another bug.

About 7 years that opportunity arose. I purchased a 1969 VW Beetle, that was in fairly decent shape, but still needed some work. I kept hoping that the money would come along that would allow me to fix it up, but that money never came.

Well the hope had all died out and turned into guilt that this bug was still sitting in my parents garage, taking up valuable space (sorry dad) and offering a habitat to mice (sorry mom). 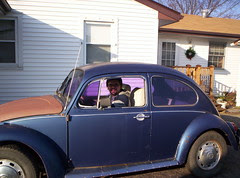 But this last Christmas that hope sprang to life again. My dad took it to a bug mechanic and told him to make it drivable. I know that it was probably because he was sick of looking at it in his garage, but nevertheless, I am very excited.

It is running very good, but it still needs some body work. It needs a new hood and a new fender. AND a new paint job. I'm thinking something green... What do you think?

If I can find a picture of my original Bug, I will scan it and post it so you can see its amazing color.

Does a "bug fund" sound good too? I wonder if I could set up online donations...
at February 17, 2005
Email ThisBlogThis!Share to TwitterShare to FacebookShare to Pinterest