I was in Jacksonville, MS. I was almost done unloading a 10,000 lb. shipment (which is a story in itself), when my boss calls me. He tells me that there is another driver that has an overflow. (For you non-truck drivers, an overflow is when everything that is supposed to fit on the truck, doesn't fit.)

The other driver had relayed to my boss that there were just a few items left over, nothing that one person couldn't get by himself. He also said that everything was moved to the garage. Sounded easy.

And it would have been easy if this other driver had actually been telling the truth.

I didn't arrive at the residence, which was way down near the coast, not too far from New Orleans, until about ten at night. Now remember, I had already unloaded an entire shipment of stuff, then I had spent nearly five hours driving to this location. To be completely honest, I was pretty tired before I had even arrived, but I kept telling myself that it was just a little bit of stuff. Nothing too difficult for a mover like me! 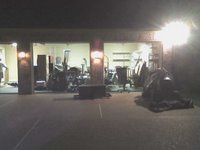 So, like I said, I pulled in about ten that night. Oh sure, everything was in the garage, but it was a three car garage! And it was full! There were a couple of dressers and an entertainment center, two entire lawn furniture sets, several pieces of exercise equipment, etc., etc., tons of stuff! I couldn't even begin to tell you how much stuff was there. The picture that I have here barely does it justice. All I can say is that it ended up being 4,500 lbs. worth. (That is about a half a truck load.)

I couldn't believe it. Right after I pulled up to the house, the owner came out and said, "Well, I gotta get to bed. Good luck. See you later."

So, I started working. One piece at time I moved all of that stuff up there. I called upon all of my many moving skills to tote, drag, and roll everything up that ramp. Until...

It was about one in the morning. I had been ignoring it the entire time, glancing at it out of the corner of my eye, but ineveitably I had to deal with it. It wasn't a little riding mower, it was one of the big ones -- heavy duty stuff here. I thought that I could push it up the ramp. I have done that before with much smaller mowers. Didn't work. Then I thought that I might be able to pull it up the ramp, so I tied a strap onto it and I was able to get it about half way up, but then I had visions of it rolling back down the ramp and crashing through the back of the garage. I quickly rolled it back down.

Then I said to myself, "I am smart guy. I know geometry, calculus, advanced mathematics... I can figure this out." I stood there for about 10 minutes, and right before I dozed off in that standing position, the solution hit me.

I want you to know that I am posting this video, knowing that I will be made fun of for this. Please take into consideration that I had been awake since about 5:50 that morning, and it was now about 1:30 the next morning. I tied two straps onto the mower, and as I tightened the straps, it gradually pulled the mower up the ramp.


All I can say is that the mower made it up there. After it was in the truck, I quickly strapped it off and drove to the nearest hotel.
at September 20, 2006
Email ThisBlogThis!Share to TwitterShare to FacebookShare to Pinterest
Labels: moving, personal, pictures, stories