A Call to Resurgence by Mark Driscoll -- Book Review 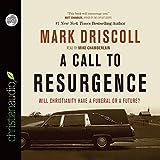 One of the lessons that I have learned about listening to non-fiction audio books is that I will always be distracted, no matter how good the book. It could be the most fascinating book that I have ever listened to, or it could be the most boring monotonous book in existence, but I will be distracted. At some point while listening, I will catch myself thinking about something other than what this audio book is saying to me. With some books this happens more often than with others.

But I have found that one of the most telling attributes of an audio book is the form of my distraction, not just how often I am distracted. With some audio books I find myself contemplating supper or a test that I need to grade, but with other audio books, I find that my mind has latched onto a thought or concept that is being discussed in the book and my brain must travel down that path, even though the voice talent has continued reading.

With Christian Audio's version of A Call to Resurgence: Will Christianity Have a Funeral or a Future by Mark Driscoll my mind was constantly trailing off down a thought or concept presented by the author. For example, the chapter dealing with "tribalism" was quite enlightening.  Especially when Pastor Driscoll discussed these tribes through the illustration of national borders and local boundaries. Even though we evangelical Christians might sort ourselves out into different "tribes" there is an importance is understanding and operating with the reality that there are others in our same "country."

What I found even more fascinating were his explanations regarding the differences between Christendom and Christianity. This was an important distinction that it had never occurred to me to make, but once the differences had been clarified, I wasn't quite sure how I had missed it. I believe that distinguishing Christendom and Christianity will prove to be an invaluable tool as we attempt to navigate the modern religious and political scene, not only here in America, but across the globe.

This book was an absolutely worth-while read, and I would recommend it to anyone.  I will most likely have to purchase a hard copy of this book so I can take my time and contemplate each chapter a bit  more in-depth.
at November 04, 2013
Email ThisBlogThis!Share to TwitterShare to FacebookShare to Pinterest
Labels: audio book, book review, books, books 2013, christianaudio, Christianity, Mark Driscoll, Resurgence