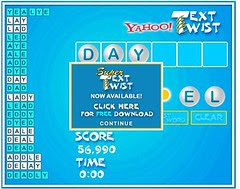 I believe that credit should go to whom credit it due.

4th period, every other day, I teach a computer class. The computer class is composed of 4 seniors. Most days they work pretty hard on their project, but every so often they just don't want to do anything. In fact, one of them never wants to do anything. Some days she even talks me into letting her play computer games for a significant portion of the class time.

Most of these kids go to the same website to find all of their games. It is called addictinggames.com, and it is packed with several, well... addicting games.

There is one game in particular that she really enjoys called Text Twist. At first I thought that it seemed a little boring, but now I am... you guessed it... addicted. 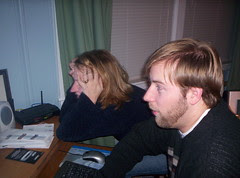 As an addict, I couldn't stop there, with just me and my computer class being addicted. I had to get others involved. So I started with the one closest to me: my wife.

She was only slightly interested at first, like I was, but the more we played, the more she wanted to play, and on several occasions you could have found us poised in front of the computer trying to get to the next level.

But it didn't stop there, I needed to get others involved, so last night I made my move. Before you knew it, I had my brother-in-law hooked in. And there we were at 1am trying to get to the next level. And we did, we made it through several levels, and made it to 56,990 points!

Probably not a record, but I would like to see any of you try to beat it!

at December 04, 2004
Email ThisBlogThis!Share to TwitterShare to FacebookShare to Pinterest