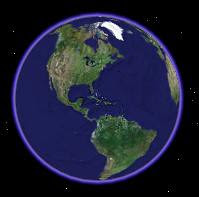 I pretty much like about everything that Google does. They do cool stuff.

One of my favorite new programs that Google has come up with is called Google Earth. To the right I have added a picture of Google's Earth. I know that it may not seem that impressive at first glance, but then you start to zoom.

All of the images are real satellite images. And you can really zoom in. It is awesome! Find your house, find your school.

But then, I really got to thinking about this. I could see the sites! I could visit (via Google's satellite imagery) some of the wonders of the world! So I have started a trek, and I would like to share it with you. 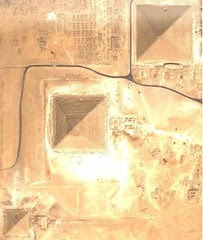 I decided to start with one of the oldest, and most impressive ancient wonders. The great pyramids. I looked along the Nile River, and there... right where they were supposed to be... The pyramids!

Of course, I could only see them from the top, but it was still awesome! I was looking at THE pyramids. And the coolest part about it is that this picture was taken from a satellite. I can't get my mind around it.

So here they are. And I have come to the end of my first Google's Earth Expedition. But before I go, I will zoom in on one of these pyramids, so you can see the ruins in front of the pyramid. 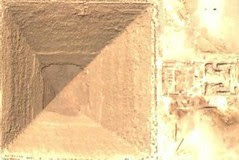 at September 01, 2005
Email ThisBlogThis!Share to TwitterShare to FacebookShare to Pinterest