it's big and shiny 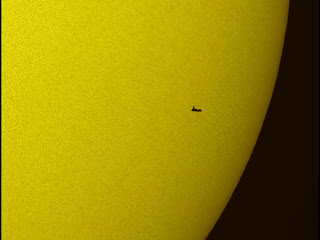 This is a really cool image from the NASA image of the day gallery.

The site gives it this description:

In this tightly cropped image, the NASA space shuttle Atlantis is seen in silhouette during solar transit, Tuesday, May 12, 2009, from Florida. This image was made before Atlantis and the crew of STS-125 had grappled the Hubble Space Telescope.

The phtographer made this image using a solar-filtered Takahashi 5-inch refracting telescope and a Canon 5D Mark II digital camera. 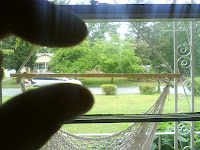 I just looked at it and I thought... IT is really big, and we are really small. Because you do realize, don't you, that that space shuttle is millions of miles away from the sun. Usually when really big things are really far behind you, you can blot them out.

Like in this picture where I can hold an entire tree between my fingers.

That is how things work. So, if that huge space shuttle can't blot out something that is millions of miles away... That thing must be HUGE.

One other point. I don't know about you, but on Tuesday, May 12, 2009... I don't remember any shadows going across the sun. I don't remember thinking that the light was diminished in any way. That giant... almost as big as a jumbo jet ... space shuttle didn't make a dent in the light the sun was shining down on us.

I am sure that there is some spiritual application in that thought.

Anyway, I saw that image and it was so cool, that I just had to pass it on.
at May 16, 2009
Email ThisBlogThis!Share to TwitterShare to FacebookShare to Pinterest
Labels: pictures, space, spiritual