Finally (and a personal note about store brands) 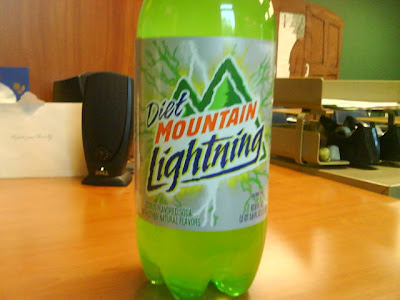 When I finally switched to diet, I kept hoping that they would come out with a diet version of the Mountain Lightning. 10 yrs. later it is finally here. Now, maybe it has been around for longer than this, but this is the first time that I have seen it. And I am pretty sure that I check every time I go to Wal-Mart.

My first real encounter with the ins and outs of the world of generic came when I used to work at a cheese packaging plant in Crawfordsville, IN. It was there that I watched them take one huge block of cheese and as they began to slice it down and I watched it get packaged, I noticed that from the same block of cheese we would change the roll of plastic packaging material several different times. Once I got "promoted" to the end of the line to fill and stack the boxes of cheese, I learned the real truth. From one block of cheddar (or whatever the kind of cheese of the day was) we would package every brand of cheese that was put out of that plant. From the most expensive brand to the plain label brand, it all came from the same block of cheese. At the time that I worked there, there were over 20 brands of cheese that were packaged by that plant.

Another example... directly related to the Mountain Lightning. At one of the Distribution centers that I worked at, I talked to a truck driver that delivered soda. He told me that he used to deliver Sam's Choice. He said that the interesting thing about it is that sometimes it was bottled by Coca-Cola and sometimes it was bottled by Pepsi-Cola. Obviously the formula remains the same for whoever bottles it, but the company that put in the lowest bid was the one who bottled it for a certain amount of time.

The important thing to remember is that the quality remains the same. Sure, it might taste different , but that is the formula, it isn't because anything has and greater value. You truly are paying for the name.

When I was working at the Target Distribution center, in Oconomowac, WI, I spent half of my time there as a receiver. In other words, I helped unload the trucks that were bringing products in from all over the world. We would then sort the different items out to their proper departments, to eventually make it onto a conveyor and into a truck that delivers it to a store. I would love to tell you about that process, but it would bore you to death.

I could give other examples, but I have digressed off of my excitement about the Diet Mountain Lightning.

at May 12, 2009
Email ThisBlogThis!Share to TwitterShare to FacebookShare to Pinterest
Labels: caffeine, random, rants, soda